Tiny two-seat EV is destined for UK dealerships after 14,000 customers registered an interest

The Citroën Ami electric quadricycle will go on sale in the UK next year, with 1000 potential customers having placed a reservation just two weeks after the French firm opened its order books.

Citroën also confirmed that the number of people who have formally registered their interest in buying an Ami has increased to 14,000.

Potential customers were invited to place a £250 refundable deposit via a dedicated website to secure their Ami. Final pricing and specification details have yet to be announced, but reservation numbers are said to be on the rise.

Citroën has also shown off personalisation options for the model, allowing customers to add decorative graphics and personalised images to make their car unique.

Six Citroën-made graphics will be available when the Ami launches in the UK, including Jungle, Tutti Frutti, British Globetrotter, Camo, Tribe and Trendy.

Customers based in France are able to create bespoke designs, such as go-faster flames or images of pets, from their own photos and have the graphics delivered to their home.

The decision marks a significant U-turn for Citroën, as the Ami was never intended for sale in Britain. But following the reception from eager buyers and having been championed by the firm’s managing director, Eurig Druce, it has been given the go-ahead.

“The response to the Ami has been overwhelming, and the momentum has just built up to a point that we can’t say no,” said Druce. “It’s not just a vehicle with a following, either; the Ami embodies one view we have of future transport, around affordability and usability. Selling it here gets those values across in a way that no marketing campaign ever could.”

The Ami will only be sold in left-hand drive, but at 1390mm in width, and with strong all-round visibility due to its 2410mm length, in practice this means the driver sits only around 300mm adrift of a typical car driver. Other modifications required for sale in the UK are limited to changing the charging plug for a Type 2 fitting, plus headlight adjustments and calibration to miles per hour.

It is notable not only for its quirky design and tiny footprint, but also its restricted performance, aimed only at city and short-haul use. The Ami is limited to a top speed of 28mph and has a range of just 43 miles. Drivers must have a full licence in the UK, although some European countries allow 14-year-olds at the wheel. 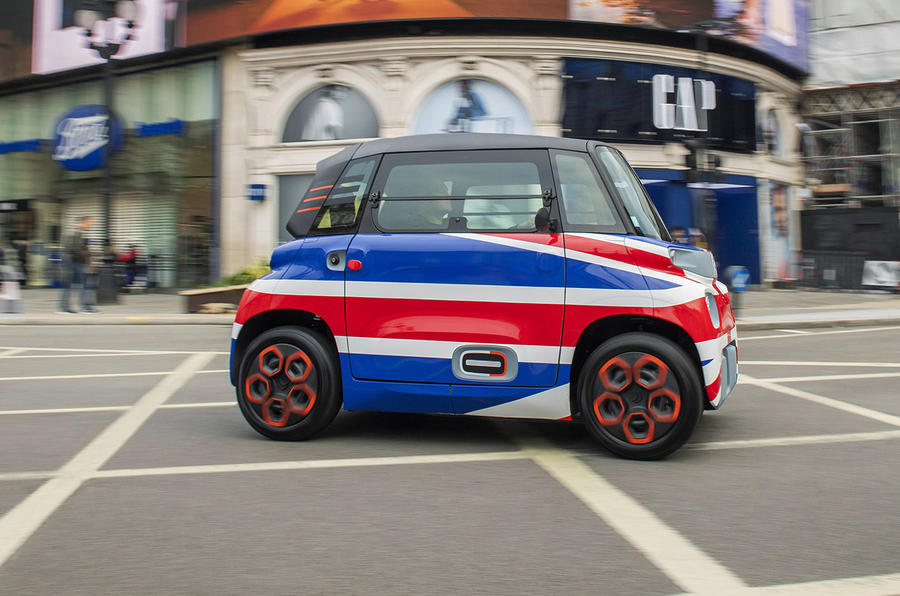 While no UK pricing has been revealed, European pricing suggests it will retail at approximately £6000, although leasing options will also be offered, via a deposit and monthly payments or potentially via short-term rentals, possibly even by the minute if local authorities engage in mooted schemes to provide this.

“The philosophy of the Ami is that it should be as affordable as a mobile phone,” Citroën CEO Vincent Cobée told Autocar. He revealed that 80% of its 9000 customers to date have been new to Citroën, and that 50% had bought the car without ever visiting a dealership. “For us, it is both one expression of what Citroën today is about and it opens up a way into a new e-commerce economy. It is a vehicle we can learn from.

“Today, Citroën is about delivering personal mobility in an engaging, affordable way. If we all want 500km of range, all-round performance and full autonomy then we must all be ready to pay £100,000 for a family car. At Citroën we don’t believe that is the right way, and we will be militant in our efforts to provide alternatives.”

Cobée also confirmed that Citroën was readying a package of personalisation options for Ami owners, including different-coloured body panels and allowing them – through a third-party specialist – to wrap the vehicle in any way they wish.

Ami, myself and I: Life with Citroën’s 28mph urban EV​