The next-generation Porsche Cayman and Boxster are set to adopt a bespoke electric sports car platform designed to mimic the current combustion cars’ mid-engined characters and which could go on to underpin future Audi and Lamborghini models.

Using a novel battery arrangement referred to as the ‘e-core’ layout, Porsche’s entry-level sports EVs will offer as low a seating position and centre of gravity as possible, in line with their dynamic billing.

The Stuttgart firm recently revealed the Mission R concept, which officially previews a potential one-make racer and also strongly hints at styling details and dimensions of the as-yet-unannounced electric Cayman and Boxster.

Porsche has admitted that the Mission R reflects work being done in parallel in the firm’s design studio on future EVs, hinting that certain styling elements will in due course be seen on production models. The car is also close in dimensions to the current 718 Cayman and Boxster.

Porsche used a reworked version of the 718 Cayman chassis to make the Mission R concept, but when asked about a possible production version, company boss Oliver Blume said: “When we electrify a model, we won’t do a carry-over of the combustion engine [platform] because there are too many compromises. “When we are looking to future sports cars, we would develop its own platform but connected with some modules coming from other cars. But the platform will be unique.”

The Mission R is designed to mimic a mid-engined sports car design by placing the batteries – the heaviest element of the vehicle – behind the driver but ahead of the rear axle where the engine would usually lie. 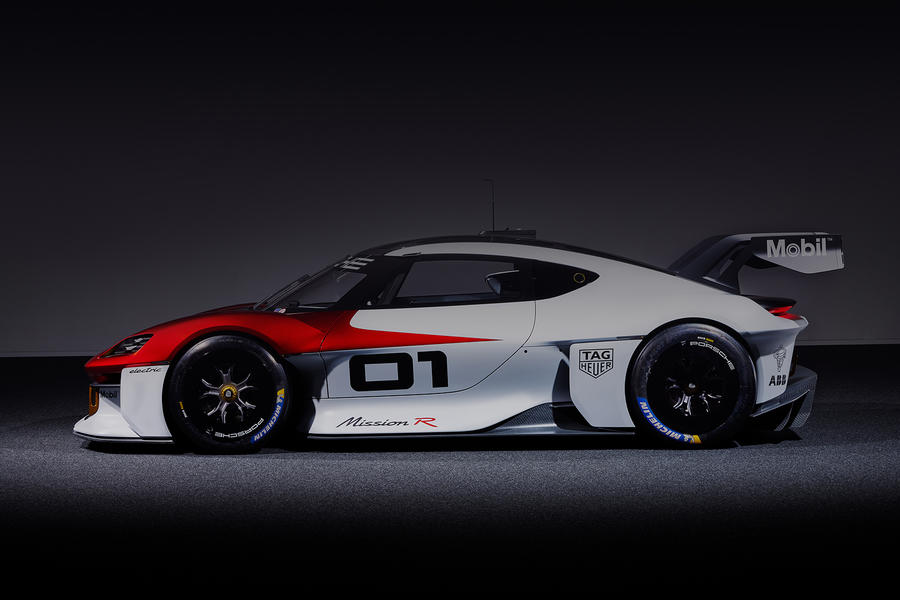 Porsche technical chief Michael Steiner said the decision to adopt the unusual layout had been driven by a need to make the car as low as possible in order to reduce drag, but that approach prohibits the traditional EV ’skateboard’ chassis with underfloor batteries. That design is featured on Porsche and Audi’s shared J1 architecture, used by the existing Taycan, and the forthcoming PPE platforms.

“With a typical two-door sports car, you see the car is really low because to reduce drag you want the silhouette as low and flat as possible,” said Steiner. “To do that you should have the driver sitting as low as possible, and if you do that there is no space for a battery below the seat of the driver.

“It’s the same reason why a lot of super-sports cars today have a mid-engine design, with the engine behind the driver. With today’s battery cell technology, the batteries are the biggest and heaviest part of the car – and this could be true for the next decade or so – so we developed what we call the e-core battery design. Packaging-wise and centre of gravity-wise, it’s more or less a copy of a mid-engine design.”

Steiner added that the design also aids the weight distribution and balance, especially with the Mission R concept’s two electric motors – one on each axle – biased towards rear-driven power. But while the Mission R concept uses a specially adapted platform, Steiner echoed Blume by ruling out such an architecture for production models.

“There is no platform unchanged by electrification, but the only platform within our portfolio that might not change that much would be for mid-engined cars like the Boxster and Cayman,” said Steiner. “Ten years ago, we started with prototypes of electrification with this mid-engined layout because you could use the space of the engine and transmission for the battery.

“But we decided within Porsche, starting with the Taycan, that we will do no conversion-type design, with space for an internal combustion engine, plug-in hybrid or fully electric options, because there is always some compromise in weight, package and other dimensions.

“So even for mid-engined cars, we still see a good reason to just design a full-electric platform. That might change, but not in the next few years.” 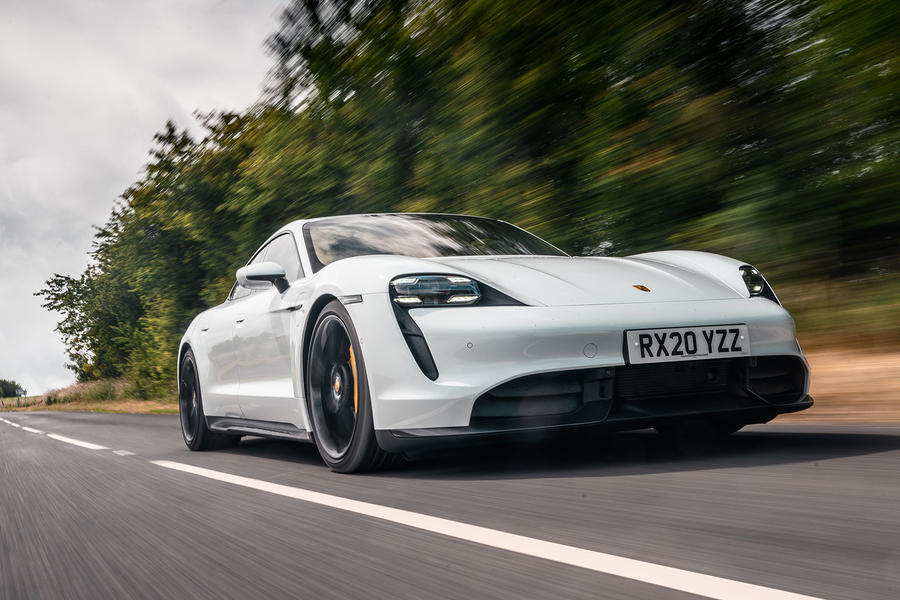 Steiner said Porsche was investigating ‘mid-engined’ battery design ahead of trying to mimic a rear-drive car such as the 911 because, with current EV technology, the firm wanted to keep the batteries within the central crash structure of the car for safety reasons.

Steiner hinted that such a platform layout could also be used for higher-performance cars in future, perhaps from sibling brands Lamborghini and Audi, noting that you could develop a concept such as the Mission R with a layout “in the direction” of a super-sports car.

“This is not only driven by technology,” he added. “Often, the main direction comes from what we expect the market would favour, and then we try to develop the technology in that direction.”

The Volkswagen Group is currently developing the SSP platform, which in effect fuses the Volkswagen-led MEB and Audi/Porsche- developed PPE architectures and features a skateboard chassis-style design with underfloor batteries.

The group is also working on a unified battery cell design, which it says could be used for more than 80% of the EV models it produces. However, that would still leave significant room for cars using a different design of battery, which might be required to fit the ‘mid-engined’ layout of the potential new platform.