Based on the V8-powered GT 63 S 4-Door Coupé, Affalterbach’s first plug-in hybrid model supplements the reserves of the twin-turbocharged 4.0-litre petrol engine with a 201bhp electric motor on the rear axle in a new arrangement referred to as the P3 drive system. Derived from the hybrid drivetrain of Mercedes-AMG’s Formula 1 racer, it’s said to give optimised weight distribution and the quickest possible deployment of torque.

With more power on tap than any AMG model yet produced and more than 1033lb ft of torque, it will clear the 0-62mph sprint in just 2.9sec and top out at 196mph – effectively matching the smaller and more track-focused GT Black Series two-door launched last year for outright pace.

The electric motor takes its power from a 6.1kWh, 400V battery pack. Claimed to weigh just 89kg, this was “designed for fast power delivery and draw, not for the longest possible range”.

Mercedes claims the new PHEV will manage 7.5 miles of EV running per charge, with the electric motor capable of handling propulsion alone at speeds of up to 81mph. 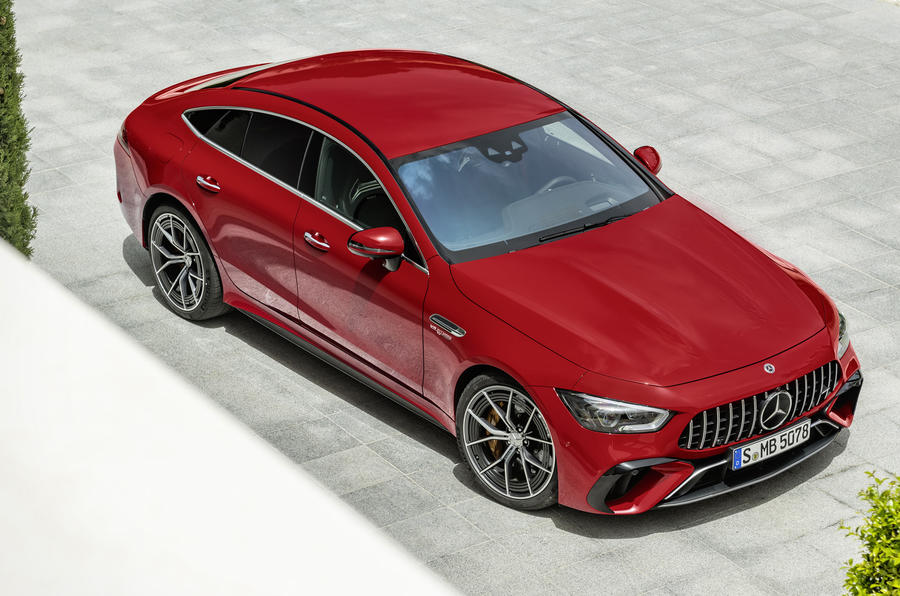 Electric power is said to be “always available”, enabling quicker acceleration out of corners or rapid overtaking manoeuvres.

Design changes over the standard car are subtle, limited chiefly to a new front bumper modelled on the two-door GT, bespoke badging, new exhaust outlets and exclusive 20in and 21in wheel designs. Otherwise, the PHEV is almost visually and technically identical to the recently facelifted regular GT 4-Door Coupé.

It’s the same story of subtle adaptations inside, but, as with other Mercedes PHEV models, there are a number of hybrid-specific displays for the MBUX infotainment system, including an EV range indicator, real-time power consumption data and an electric motor power gauge.

AMG chairman Philipp Schiemer said: “With the new GT 63 S E Performance [4-Door Coupé], we’re transporting our brand DNA into an electrified future. In doing so, we’re following our own technical path, which is what has always made AMG so special and desirable.

“With this new concept, we’re also opening up to new target groups who will experience Mercedes-AMG as the performance luxury brand of the 21st century.”

The new model is projected to achieve 32.8mpg on the WLTP combined cycle while emitting 196g/km of CO2.

Pricing and availability details have yet to be confirmed, but expect a sizeable premium over the £141,855 commanded by the standard GT 63 S 4-Door Coupé.

Mercedes-AMG set to give all future models plug-in option​