Just eight Plus Four off-roaders are planned to be built, each priced from £200,000

Morgan has shocked its supporters and much of the sports car world by launching a £200,000 limited-edition off-road version of its recently launched Plus Four roadster, dubbed CX-T, which is “designed explicitly for overland adventure”.

The car, which has made its public debut at Salon Privé, has a three-fold purpose, according to design chief Jon Wells, who has harboured a desire to produce an off-road Morgan for years. First, it is an opportunity to demonstrate the strength and rigidity of the new CX monocoque platform that underpins both the new-generation Plus Four and Plus Six models. Secondly, it pays homage to the historic durability of Morgan cars, demonstrated in extensive endurance trialling victories in the 112-year-old company’s earliest days. Thirdly, says Wells, it recognises the fact that many Morgan owners have tackled “extraordinary adventures” even in their standard models.

The CX-T project began in earnest early last year when one of Morgan’s new owners, Andrea Bonomi, chairman of the Italian-based Investindustrial private equity group that bought the Malvern Link concern in 2019, happened to see an illustration of an off-road Plus Four on the design department wall and asked if such a car could work.

Wells and Morgan MD Steve Morris were immediately keen on the idea, so a plan was hatched to build eight cars – several of which have already been sold to “friends” of Morgan and the investors themselves. “We don’t anticipate that the remaining cars will be without owners very long,” says Wells. 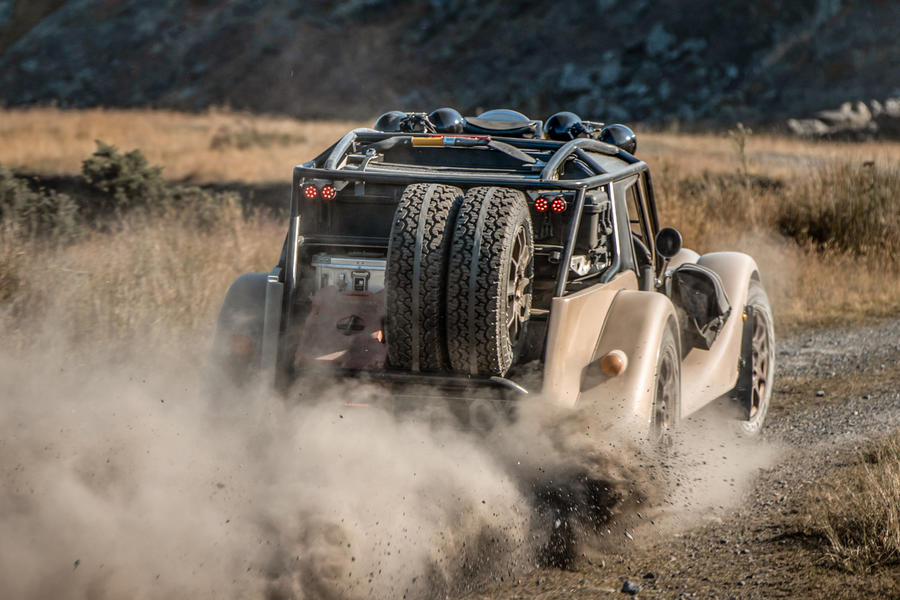 To ensure the CX-T’s capability in extreme driving, Morgan enlisted the aid of the Huddersfield-based specialist engineering firm Rally Raid UK, whose principal, Mike Jones, has built 60 Dakar vehicles for 13 events over the years – and never failed to have a finisher.

Together, Morgan’s and Rally Raid’s engineers decided that the standard Plus Four chassis and powertrain could fit the bill, if equipped with modified Plus Six suspension arms and bushes, much bigger wheels and tyres and EXE-TC coilover suspension units, already well proven off road. Together, these measures have increased the ground clearance from a standard 120mm to 230mm.

There is a five-piece underbody protection system, including a front impact guard, an engine guard, a rear chassis guard, a mid-section shield and a new rear undertray. The exhaust system is redesigned with its outlets in the car’s extended rear flanks, so as not to limit ground clearance.

The CX-T keeps the Plus Four’s standard two-wheel-drive set-up and its transmission is mostly standard, but it adopts a BMW xDrive electronic differential – with bespoke software – that provides three driving modes, including full locking of the diff in extreme conditions. It runs a shorter final drive ratio than standard to compensate for the much larger-diameter wheels and tyres and the wheel arches have been widened for more clearance.

The CX-T is recognisably based on the Plus Four, although it now has a bespoke composite hard-top and a prominent tubular roll-over cage and is highly modified to maximise luggage and equipment-carrying capacity. There is an internal roll cage as well, bolted to the original structure, but despite all of the additions, the all-up weight is less than 1300kg, a remarkable achievement. 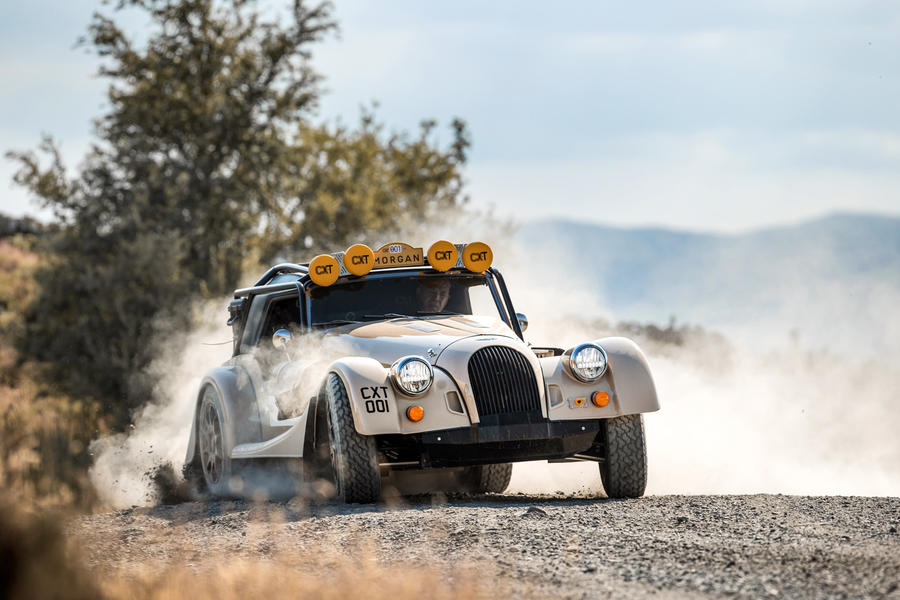 The traditional sloping rear panel of the Plus Four has been replaced by bespoke side panels and an equipment rack designed to carry two spare wheels, several “ruggedised” Pelican cases, a tool box and twin petrol and water containers. All equipment has been painstakingly designed for secure carriage but also quick release. Wells and his colleagues are also designing bike racks and roof boxes to suit prospective owners’ special instructions

Building of the eight CX-Ts has already started at Morgan’s factory at Malvern Link, Worcestershire, and all should be complete and ready for road registration by the end of the year. Morgan officials are guarded about whether more CX-Ts will be built if the model is successful, although they agree “it could happen”. Meanwhile, only three of the initial CX-T batch remain available to new owners and they are likely to be gone soon.

Morgan Plus Four and Plus Six gain fresh tech, new logo for 2021