Prices start from £14,905 for updated supermini with LED headlights and assistance systems included as standard

Skoda has revealed UK pricing and specification details for the new, fourth-generation Fabia ahead of order books opening on 28 September.

Four specification levels will be available, with the entry-level S starting from £14,905. A sporty Monte Carlo trim is expected to arrive next year, although pricing information has yet to be confirmed.

The Polo rival now features LED headlights, front assist and lane assist as standard, as well as a DAB radio, a 6.5in infotainment display and Skoda’s eCall+ emergency call system.

The next step up, SE Comfort, starts from £16,795, with larger, 15in alloy wheels, front foglights and an improved leather steering wheel, in addition to rear parking sensors, adjustable lumbar support and height-adjustable front seats.

The £17,495 Fabia Colour Edition is positioned just below the range-topping specification, offering 16in wheels, privacy glass and roof-coloured door mirrors, as well as an 8.0in infotainment screen. The Colour Edition also adds a 10.0in digital cockpit, keyless start and Skoda’s trademark umbrella, situated in the door pocket. Metallic Graphite Grey and Pearl-Effect Magic Black exterior paints can be selected to contrast with the roof, wing mirror caps and alloy wheels.

The first example of the Fabia supermini left the production line in the Czech Republic in July, as the firm prepares its Ford Fiesta rival for its market launch later this year.

The Czech manufacturer claims to have invested €110 million (£94m) in adapting its Mladá Boleslav production line to build the new supermini alongside its Kamiq and Scala siblings.

The fourth-generation Fabia is said to be the most spacious car in the supermini segment, thanks to significant increases in dimensions across the board compared with its predecessor.

It makes the landmark shift onto the Volkswagen Group’s MQB-A0 supermini platform, as used by the Audi A1 Sportback, Seat Ibiza and Volkswagen Polo, ditching the PQ architecture used in various iterations since the Mk1 Fabia arrived in 1999.

These much more modern underpinnings accommodate “improved comfort features and numerous advanced safety and [driver] assistance systems”, as well as a range of more efficient powertrains. 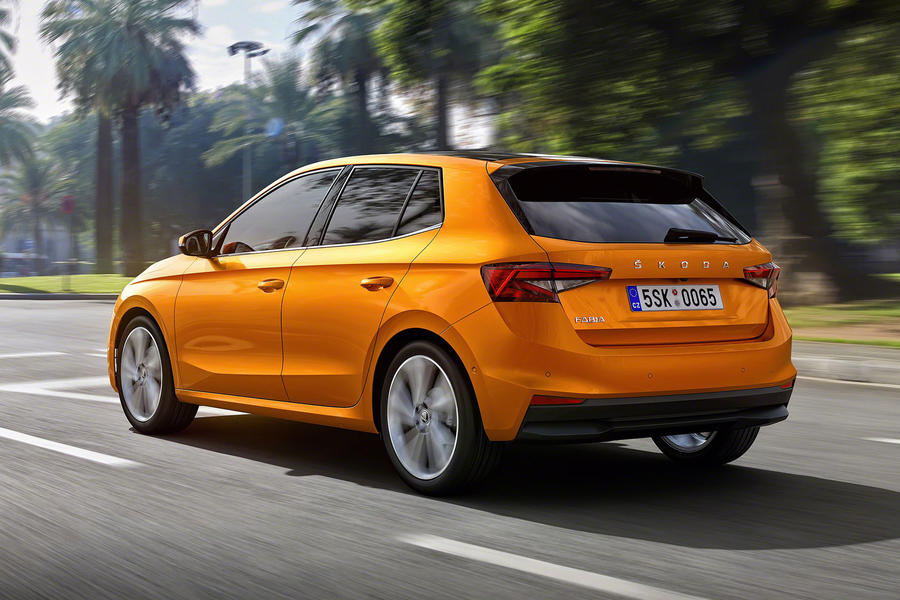 The new Fabia’s design cues are only evolutionary but bring it more closely into line with newer Skodas, including the Scala, Kodiaq and Enyaq iV.

Slim headlights (LED as standard), new foglights and and a reshaped bumper are the most obvious changes at the front, while the new-look rear also mirrors the latest Skodas, with the brand’s name spelled out across the bootlid, optional LED brake lights and a more prominent spoiler.

Head designer Oliver Stefani hailed the new Fabia as “much more dynamic and grown-up” than the Mk3 and said: “We’ve deliberately not changed the essence of the Fabia: as is typical of a Skoda, it’s a functional and practical everyday companion.”

A highlight of the redesign is the improved aerodynamic efficiency afforded to the supermini. Its drag coefficient of 0.28 is down from 0.32 before and said to be “a record in the small car segment”.

Skoda highlights aero-enhancing active cooling shutters at the front that, when closed, can apparently save “up to 0.2 litres” of fuel per 62 miles at a constant speed of 75mph, equating to 5g of CO2 per kilometre.

The new spoiler, reshaped door mirrors and ‘side finlets’ contribute to the improved efficiency, too, by minimising turbulence around the rear end. There are even newly designed plastic trims for the wheels and added underbody panels for improved airflow. What’s more, the new Fabia is said to be stabler than the outgoing one, with a “robust body structure” and a “high degree of torsional stiffness”. 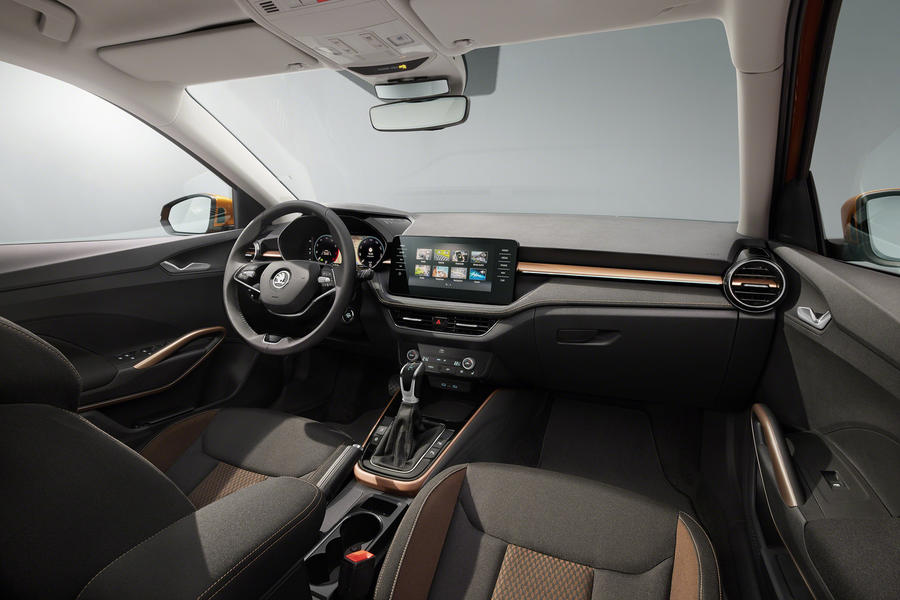 The Fabia’s reinvention is most apparent inside, where it has been given “comfort features as found in higher-tier vehicles” and a complete redesign as part of a move to link it more closely with its larger sibling, the Octavia.

Its familiar trim levels offer different designs for the dashboard trim strips, while higher-end versions get a fabric-covered dashboard with colour-contrasting stitching. All models get Skoda’s distinctive new circular air vents and new multifunction steering wheel, plus ambient LED lighting and dual-zone climate control are available as options for the first time.

Chief among the upgrades, though, is the new dash-top infotainment touchscreen. Internet radio, real-time traffic updates and a wi-fi hotspot for passengers’ devices are now possible, courtesy of an integrated SIM card, while other firsts for the Fabia include wireless smartphone connectivity, gesture control and the introduction of Skoda’s voice-control assistant, Laura. 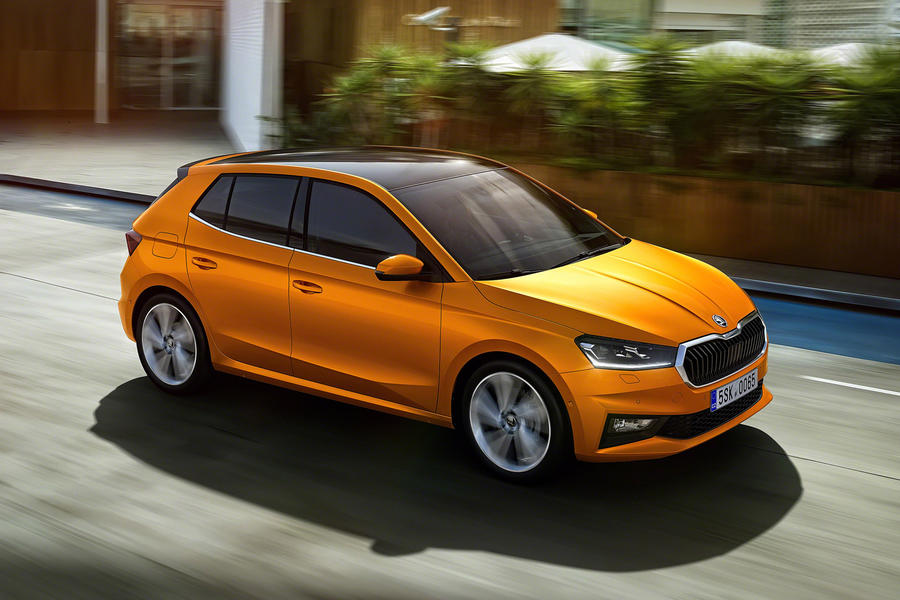 The new Fabia has a more comprehensive range of engines than its predecessor, all of them petrol-fuelled and compliant with the current Euro 6d emissions standards.

Evolutions of the naturally aspirated three-cylinder 1.0 MPI unit opens the line-up with 64bhp and 79bhp. They’re paired exclusively with a five-speed manual gearbox for a 0-62mph time of between 15.1sec and 15.5sec, a combined consumption rating of 55.4mpg and CO2 emissions of 116-131g/km.

Next up is the 1.0 TSI Evo turbo triple, which can be had with a five- or six-speed manual gearbox or a seven-speed dual-clutch (DSG) automatic. In its most potent guise, with 108bhp, it can send the Fabia from 0-62mph in 9.5sec yet closely match the 1.0 MPI for efficiency.

No sporty vRS variant is on the cards, so this is likely to remain the most powerful version of the Fabia. It will also almost certainly provide the basis for the performance-inspired Monte Carlo edition that’s due to arrive later.