The new Mercedes-AMG EQS 53 4Matic+ is the performance division’s first all-electric series-production model and will take on the Porsche Taycan Turbo S and Audi RS E-tron GT with a twin-motor set-up offering up to 751bhp.

The new luxury performance saloon will serve as the flagship model for both the EQS range and Mercedes-Benz’s line-up of bespoke electric cars. It will be followed by a range of AMG EVs, including hot versions of other EQ models built on the EVA2 platform as well as dedicated AMG models using the AMG.EA architecture.

The EQS 53 incorporates extensive technical changes from regular versions of the electric limo, including an AMG-specific electric performance motor mounted on each axle. The motors feature new windings, stronger currents and new actuation via inverters, which allows for higher rotational speeds within the unit.

These upgrades have allowed AMG to boost the power and torque of the permanently agitated synchronous motors. Standard EQS 53 models will offer 649bhp and 701lb ft, while those fitted with the Dynamic Plus package will have a Race Start mode that can increase output to 751bhp and 752lb ft. In that mode, the EQS 53 can cover 0-62mph in 3.4sec – 0.4sec quicker than the standard time. The top speed is limited to 137mph on standard models and 155mph on Dynamic Plus cars. 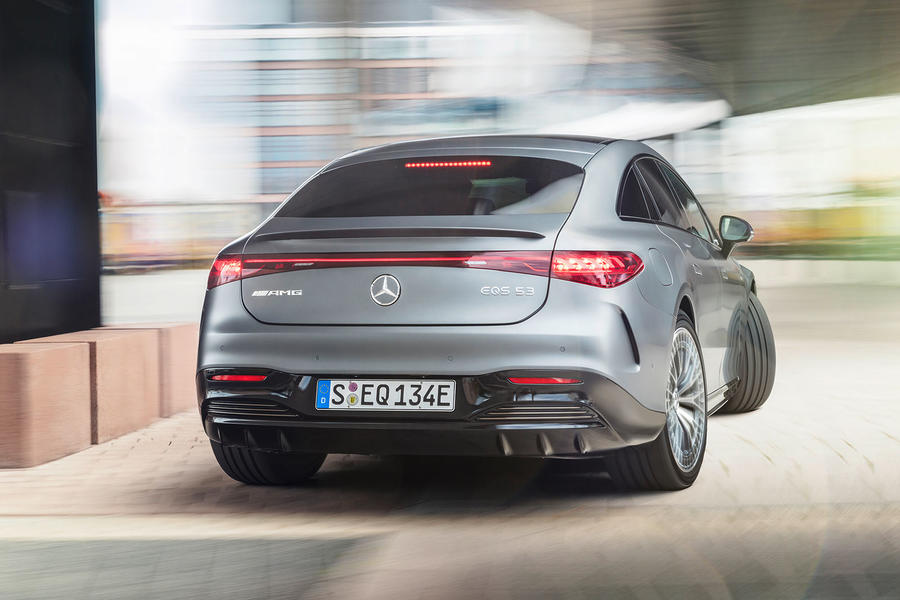 The twin-motor set-up enables fully variable all-wheel drive, although AMG has made the rear motor “particularly powerful” through a six-phase design and AMG-specific cooling functions to boost the motor’s efficiency.

Power is stored in a 107.8kWh lithium ion battery with a 400V architecture, which features bespoke AMG wiring to aid performance and offer a range of 326 to 360 miles, depending on spec. The battery management system has been customised for the EQS 53, enabling greater performance in Sport and Sport+ driving modes.

When driving, three levels of energy recuperation are available using switches on the steering wheel. The battery can be charged at speeds of up to 200kW on a fast charger.

As with the regular EQS, the new model’s suspension features multi-link front and rear axles, although AMG says it has redeveloped any components that have “an influence on the driving dynamics”, including the rear axle beam and both the subframe and the motor mountings.

The car is equipped with AMG’s Ride Control+ air suspension, which combines with electronically controlled active dampers and standard rear-axle steering. As with the Mercedes-AMG GT 4-Door Coupé, the air suspension set-up has two pressure relief valves that, AMG claims, allow the damping force to be adjusted “even more precisely” to different driving conditions. The suspension system can also analyse sensor data to alter the damping force. 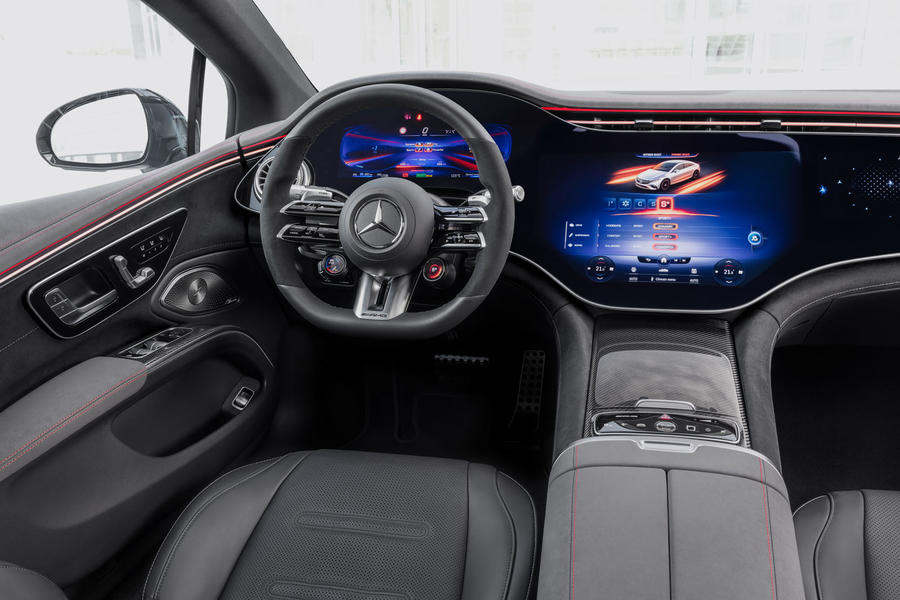 The model features a range of AMG driving modes, which adjust the suspension, handling, power delivery and battery management, as well as changing the synthesised sound to suit. There is a choice of 21in or 22in wheels, with high-performance AMG brakes as standard. Larger ceramic brakes are optional.

New AMG modes are available as part of the standard EQS Sound Experience system and include a Performance setting for Dynamic Plus models that adds “event sounds” for all vehicle functions.

The EQS 53 sports a number of bespoke AMG styling elements, many of which reflect the tuning arm’s classic design traits. These include a bespoke black panel front grille with ‘hot-stamped’ chrome vertical struts, and a reworked front bumper and apron. While the new machine matches the 0.23 Cd of the regular EQS, AMG says it has conducted wind tunnel testing to optimise the airflow, hence the reworked rear diffuser, side air intakes and a bigger rear spoiler.

Inside, the firm’s ‘Hyperscreen’ stretches the length of the dashboard. The set-up has been imbued with a number of special AMG modes and designs, including an optional AMG Track Pace system that records more than 80 data elements.

A range of extra styling options for the EQS 53 will also be offered, including an AMG Night Package Dark Chrome that features red brake calipers and carbonfibre trim elements.

The EQS 53 will go on sale later this year. UK pricing and specs have yet to be finalised. The standard EQS is expected to start from about £80,000.