The new second-generation Mercedes-Benz Citan, which has been revealed ahead of a market launch in Germany next month, will be the last model from Mercedes-Benz Vans to offer a combustion engine option.

Twinned with the Renault Kangoo and available as either in Panel Van or Tourer MPV guises, the Citan will be priced from less than €20,000 (£17,100) in its most basic form but will soon spawn an upmarket passenger-carrying version called the T-Class, as previewed by a boldly styled concept earlier this year.

The small van has been substantially redesigned to bring it into line more obviously with Mercedes’ passenger car line-up. The company highlights the vehicle’s “muscular shoulders” and “striking wheel wells” as standout features, but emphasises that ease of use remains the top priority.

The standard version is 4498mm in length, offering a 3050mm-long load bay in the van variant, but short- and extended-wheelbase options will follow, including a Mixto variant with a half-cargo, half-passenger-carrying format. 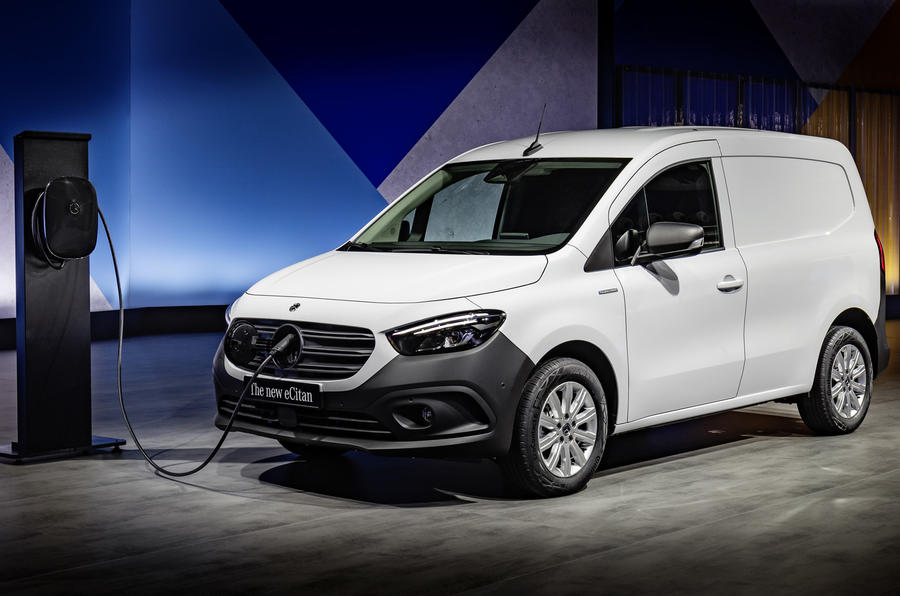 Two trim levels are available from launch, Base and Pro, with Mercedes promising “comfort and convenience systems familiar from passenger cars”. However, both versions will maintain a utility focus to ensure distance from the more premium-oriented T-Class and electric EQT due next year.

Combustion engine options include a familiar range of petrol and diesel four-cylinder units, ranging in output from 74bhp to 129bhp, the latter of which we sampled in a pre-production prototype earlier this year.

The all-electric eCitan will be launched in late 2022 with an expected range of 177 miles and a 10-80% charge time of 40 minutes. Further details of its powertrain have not been confirmed, but it is highly likely to use the same 101bhp motor and 44kWh battery as its Renault sibling.