Synthetic fuels: made of the right stuff at Pikes Peak

Synthetic fuels could secure a future for motorsport and makers of big-engined cars, as Bentley recently demonstrated at Pikes Peak

Even by Pikes Peak standards, the 750bhp Bentley Continental GT3 Pikes Peak brought a striking presence to proceedings as it lined up at the start of this year’s event. Any chance of the team taking the overall course record had already been dashed by freezing conditions with snow and ice near the summit, forcing the organisers to site the finish line at 12,780ft rather than the usual 14,115ft. But there was still a lot to play for, such as class and outright wins and proof that it’s possible to blow all comers away with a car powered by renewable fuel.

Through its GT3 customer racing programme, Bentley has plenty of experience of a variety of fuels and octane ratings around the world, so tackling Pikes Peak using a ‘drop-in’ ExxonMobil synthetic fuel proved surprisingly straightforward.

“We did a back-to-back test on the dyno and found nothing of concern,” says motorsport engineering technical manager David Argent.

The 98-octane fuel is derived from biomass but is not an alcohol fuel like the ethanol blended with everyday pump fuel to reduce CO2. Instead, biomass made from non-edible plant material is processed to make synthetic hydrocarbon petrol, similar to the fossil-derived original but without the accompanying CO2 burden.

The Pikes Peak engine is based on the GT3 unit, which in turn is derived from the twin-turbo 4.0-litre V8 used in production Bentleys. The GT3 uses the same castings (block, sump and cylinder heads), crank and pistons as the production engine, while the Pikes Peak engine has an uprated crank, conrods and pistons developed by project partner M-Sport and its suppliers. The direct-injection engine also has a pair of port injectors upstream of the throttle bodies, along with bigger turbos to provide enough boost pressure at high altitude. A second radiator is fitted at the car’s rear and a water-to-oil heat exchanger helps cool the oil. “If you’re going to build a car for Pikes Peak you must consider cooling, both intercooling and the radiator,” explains Argent.

A system injecting water both into the engine and onto the external surface of the intercooler to keep the charge air temperature down was a special addition for the Pikes Peak challenge. During initial runs without water, air being forced into the engine by the turbos reached 48-deg C – far too hot. “At higher altitude, there’s less mass flow going through the engine, and we’re also running it harder than we would normally do,” says Argent. A series of slow, tight bends at around 12,500ft – known as the Ws, because of their shape – contribute to the punishment.

“The Ws are low speed but place a high load on the engine. You’ll hit a hairpin, pull away through first, second, third, brake heavily then do the same again several times,” explains Argent. “There’s no air travelling over the radiators and the oil and water temperatures climb. The engine is really being hammered and that’s the danger area. After the Ws, there’s a fast stretch to cool things down.”

Another challenge posed by the altitude was ensuring the air compressor could produce enough puff for the pneumatic gearshift of the Ricardo sequential gearbox. The team came up with the idea of fitting a small accumulator tank in the form of a carbon-fibre canister usually used in paintball guns. Charged with compressed air before the run, the innovative modification worked perfectly.

In the hands of Pikes Peak maestro Rhys Millen, the Bentley left the start line and stormed up the hill. By the time it entered the third and final sector, it had a 12-second lead over its nearest rival when the gremlins struck. A freak occurrence in the timing of the gearbox’s ‘flat-shift’ set-up – which had covered countless thousands of miles in GT3 racing over many years – caused a backfire that split the carbon-fibre intake plenum, killing boost pressure a few corners from the end. It cost 16 seconds, dropping the Bentley to a still impressive second in the Time Attack 1 class, fourth overall and fastest of all the sustainably propelled racers. 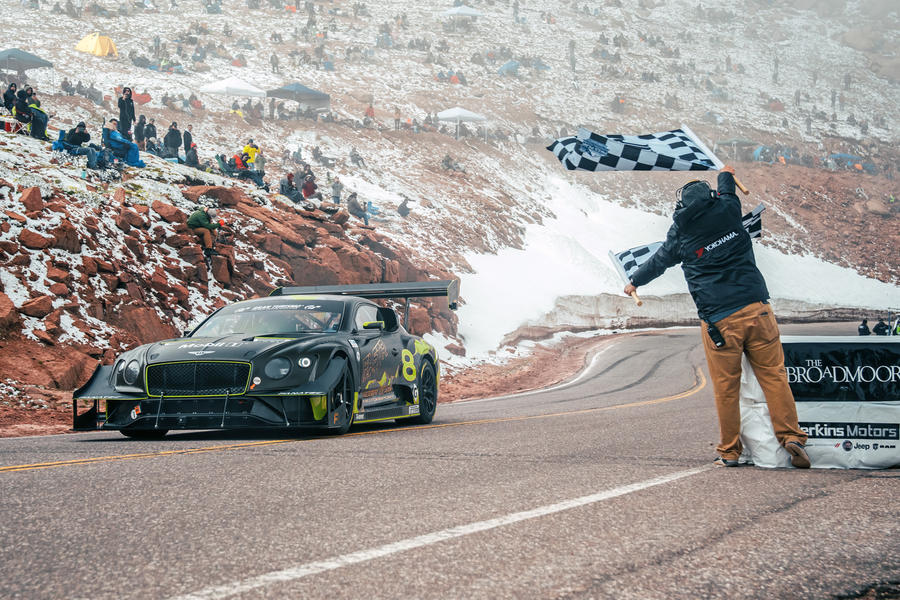 Having proven the car has the pace, that does mean the team has unfinished business. So far, there has been no official company approval for a return match, but it’s probably a safe bet that the Bentley Boys will be back next year.

For high-end companies that make large, powerful engines, synthetic fuel, which has the potential to offer a zero-CO 2 footprint, is a way to preserve the integrity of their brand as the world turns green. Not only can ‘drop-in’ synthetic fuels run in existing and unmodified (save for perhaps an updated fuel map) engines, but there are also plenty of major markets in the world that haven’t announced any ICE sale bans yet.

Porsche announced earlier this year that its Mobil 1 Supercup cars would run on ExxonMobil’s 98-octane Esso Renewable Racing Fuel, a synthetic biofuel produced from food waste, with a view to moving to an advanced e-fuel made from atmospheric CO 2 and hydrogen later.

ExxonMobil is also developing a synthetic fuel made from algae feedstock, in collaboration with Synthetic Genomics. Like all plant matter, algae consumes CO2 when growing and can yield five times more biofuel per acre than corn or sugar cane. The plan is to produce 10,000 barrels per day of algae biofuels by 2025.

What is synthetic fuel?

There are different types of sustainable liquid fuels, and the terminology can be confusing. Some are derived from plant matter, others not, but the end result may be similar. Some require changes to engines, while others (like the advanced biofuels blend used by Bentley) directly substitute for petrol.

Ethanol (ethyl alcohol) has been used for years as a petrol additive, blended to 5% and now 10% in Europe, the latter coming to the UK this year. In the US, there are around 21 million flexible-fuel vehicles running E85 gasoline, which has an ethanol content of between 51% and 83%. Some 3500 stations serve it across 42 states, but the focus today isn’t on alcohol-blended fuel. Converting ethanol to gasoline (ETG) and methanol to gasoline (MTG) produces synthetic petrol drop-in fuel. ExxonMobil’s collaboration with Porsche (see left) will eventually evolve into producing synthetic petrol using MTG.

Hydrogen from the oil giant’s Haru Oni plant in Chile will be reacted with captured CO2 from the atmosphere to produce methanol and from that easy-to-use synthetic drop-in fuel.

Under the skin: Synthetic fuels now make more sense than ever

Porsche and ExxonMobil to test synthetic fuel for racing